What is Chess Payday and How to Play

Your chess skills can help you make some extra money when you download Chess Payday.

Chess Payday is a new money-making app available on all iOS and Samsung devices. On the Apple Appstore, the Chess Payday app has a 4.6-star (out of 5) star rating and 5-star rating on the Samsung Galaxy Store.

This app was created by Skillz gaming developers, who are behind mega popular games like Solitaire Cube and Dominoes Gold. Skillz facilitated over $650,000 in cash prize payouts to their userbase last year, and that number is poised to grow significantly this year.

This game takes the classic rules of chess and adds a point system. Unlike many other money-making chess games, you won’t be playing directly against another competitor. On Chess Payday you and your competitor will each play your own individual solo games against the Chess Payday AI. Whoever scores the most points against the game’s AI will win and get to take home the cash prize.

This gaming style makes the keeps each round concise and focused. You won’t have to break your concentration and wait for a competitor to make their turn. Instead, you can complete your entire game in minutes.

All iOS and Samsung users can download Chess Payday for free on their respective app stores. Once you have the app installed, you can start playing free practice levels immediately.

But there are a few steps you must take before you start playing for extra cash.

Like many other money-making games, Chess Payday operates on an entry fee model. So, whenever you play for a cash prize, you’ll have to submit a small entry fee first. Don’t worry- these usually only cost a few cents, so it shouldn’t be too much sweat off of your back.

For every round you win, you’ll make back your entry fee and then some. Your entry fees can be worth up to 400x your entry fee. That means that you could totally make $20 off of a five-cent game.

You’ll have to deposit some cash to cover your entry fees before you start playing in cash prize tournaments. Right now, you can get an extra $10 added to your account when you make your first deposit.

You do have to meet some requirements before you can accept cash prizes. You must be at least 18 years old and in an eligible US state. As of right now cash prize tournaments are not available in AK, CT, DE, LA, or SD.

When you’re ready, you can claim your cash prize money instantly through PayPal. Chess Payday has super fast and secure payouts, and you a can trust that your winnings are safe in the app.

Want more classic games that pay cash? We’ve got you covered. Here are five more games like Chess Payday that can help you win some extra cash. Join the community of over 5 million Blackout Bingo players who are constantly winning real cash prizes. This skill-based take on Bingo is the next big game that you’ve got to have. Play solo or against real people to win big. You’ll love every second of game play in binge-worthy app. 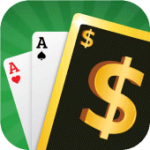 Play the true classic for cash prizes, this world-wide favorite card game is ready to pay you in rewards. Play the game to win gems to enter into solitaire tournaments where you can win big cash prizes. Don’t worry about stiff competition, this app will connect you with competitors that match your skill level, so you have big chances to win.

*Cash tournaments are not available in the following states: AK, CT, DE, LA, WA, and SD. 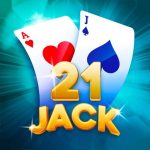 Play cards like you never have before with this perfect mix between solitaire and blackjack. Make 21s and solitaire stacks of five to stack up points. 21 Jack matches you with other real players across the world, take advantage of boosts and power-ups to increase your score until the five-minute timer is up.  There are multiple ways to win with 21 Jack, including daily bonuses and the Wheel of Fortune. 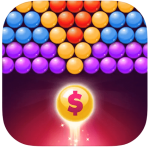 This bubble popping game is one of the App Store’s top five cash rewards games for a reason. Win free cash with this binge worthy game by entering into tournaments where you face opponents of your same skill level. You’ll love the colorful graphics and mega rewarding gameplay.

*Cash tournaments are not available in the following states: AK, CT, DE, LA, WA, and SD.